£5.7m winter support payments to help the most vulnerable

People at higher risk of fuel and food price rises this winter will receive the first of two further financial assistance payments from the Isle of Man Government totalling £5.7m within the next few weeks.

Energy Support Payments worth £300 each will be paid to people who receive an income-related benefit, such as income support or employed person’s allowance, and who are responsible for paying housing costs or can be treated as such. 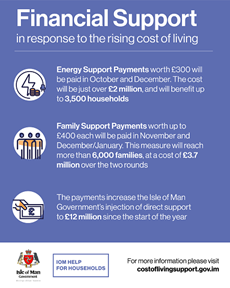 Payments will be made to qualifying individuals between 13-27 October and again in December. The exact date of payment to a person will depend on which income-related benefit they’re getting and how they’re paid it.

The total cost of these two further rounds of payments is estimated to be just over £2 million, and will benefit up to 3,500 households.

Family Support Payments worth up to £400 each – depending on family size – will be paid to people who receive child benefit. Payments will be made to qualifying individuals in November and again in late December or early January. The exact date of payment to a person will depend on how they’re paid child benefit.

This measure will reach more than 6,000 families in the Isle of Man, and the total cost of these two further rounds of payments will be around £3.7 million.

‘With household expenditure expected to come under pressure this winter, I hope this further tranche of support payments later this month will help individuals and families budget effectively.

‘These payments represent a commitment by the Isle of Man Government to assist those most affected by the increased cost of living through a period of global economic turbulence and rising fuel and energy prices. Treasury is carrying out further work on supporting other members of our society such as pensioners and those on low incomes.’

Direct support provided by Isle of Man Government since January 1, including the payments detailed above, totals £12m:

Electricity prices are also being capped at their current level until 31 March 2023. This is being funded through an Isle of Man Government loan to Manx Utilities of up to £26 million.